New discovery: Source of Selcall signals at 7.1 and 8.0 MHz in Region 3

While debugging the new DSC decoder (in NAVTEX extension) I happened to notice some DSC-like signals around 7.1 and 8.0 MHz using Kiwis in Region 3 (East Asia, Oceania). I used the Kiwi's FSK extension in "framing" mode to study them. They didn't start to decode until mark/space inversion was used. Even then what I saw wasn't quite the DSC protocol, although there were similarities. The signals appeared in a dozen different frequency channels on both bands. In many channels transmissions overlapped in time making decoding difficult.

It finally dawned on me that this was the old HF Selcall format pioneered by Codan and others in Australia and refined for amateur use by Bonnie, KQ6XA: HFLINK Selcall

Selcall is not to be confused with HF SELCAL which is the two-burst twin-tone signaling system used by aviation as a squelch gate.

Some Googling quickly found that the venerable Tony has seen this also: I56578-swl blog

But the story gets confusing from here. The original Australian Selcall format using 4 and 6-digit calling is proprietary. Later, the UN apparently published an open source version using only 6-digit calling: CCIR 493-4/UN And commercial equipment brochures mention supporting both the proprietary and open standards. Confusingly, the ITU's DSC spec also contains the "493" designation: ITU-R M.493 (note however the "M.")

Some careful on-air monitoring was the only way to figure out the protocol differences. A Selcall decoder was added to the Kiwi's NAVTEX extension. And by software version v1.537 the format of the 7.1/8.0 MHz signals was mostly understood and decoded. Fortunately, these messages are format type "automatic calling" containing position information. So each one could be plotted on a map as is done for aircraft positions with the HFDL extension. These signals originate in the South China Sea mostly off the coast of Vietnam. So the presumption is they are associated with fishing such as drift net marker buoys [update: probably not as pointed out by others].

Below is the Selcall decoder in action. Note the new "Selcall HF" menu on the right of the extension control panel. On the map decodes from the 7.1 MHz band are in magenta, 8.0 MHz in blue. The decoded messages show each protocol word, changing color to separate command words (>= 100) from BCD digits (00-99). 4-digit calling is preceeded by "__" to match the spacing of 6-digit calling. Links to a map at marinetraffic.com are generated from the decoded lat/lon. It is unknown if the message lat/lon is specified as decimal degrees (DD) or degrees and minutes (DMM). There is some evidence it is DMM (links for both interpretations are given). The map marker will be red if the minute value is more than 59. Please let me know if you see this.

It isn't clear to me if operation at 7.1 MHz constitutes an intrusion into the amateur band. ITU regulation 5.151B allows primary operation of the fixed/mobile service (7.1 - 7.2 MHz) in Vietnam, and many other countries, as an "additional allocation". I don't know what that means for marine use in their coastal waters.

I'd appreciate comments from anyone with additional information about this topic. 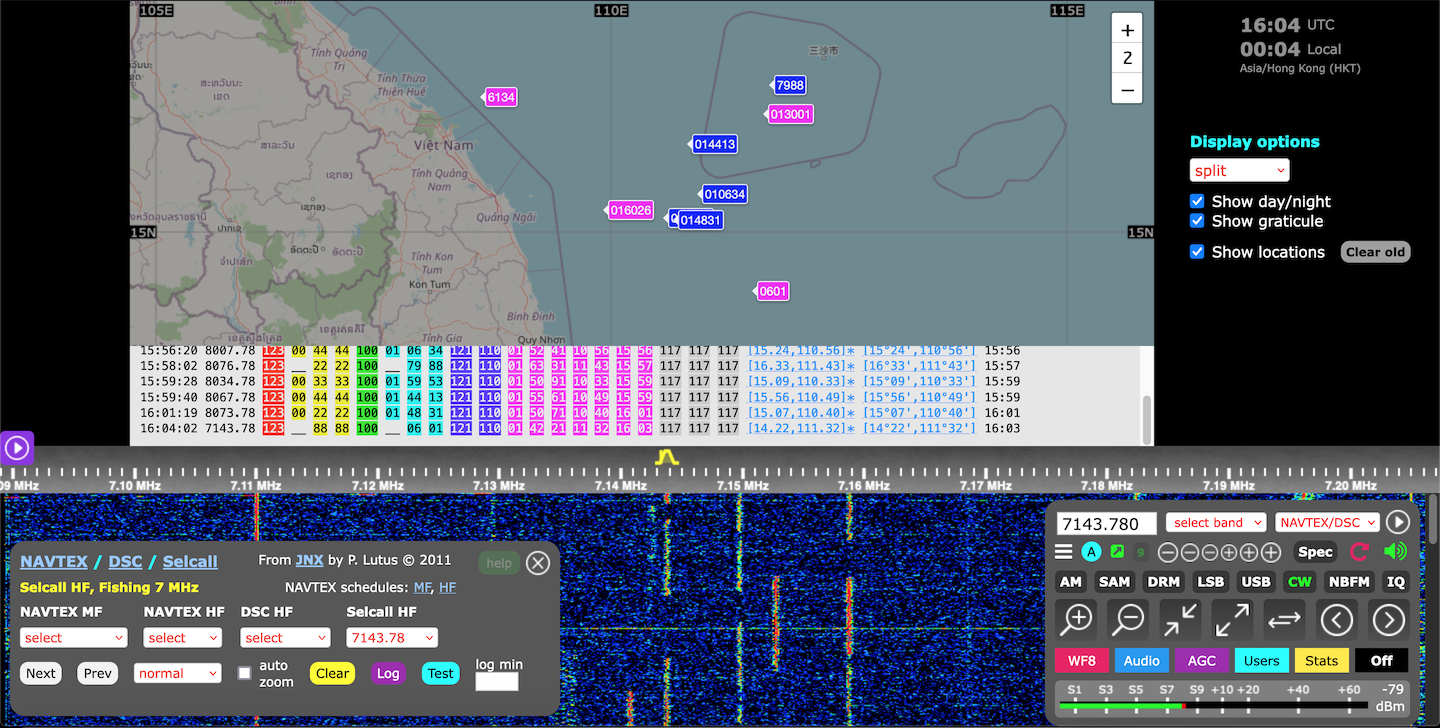