Sometime in the last hours a strange UI problem appeared in firefox: The frequency input field is too small to show all digits. For example, If the frequency is set to 15028.9 KHz, it looks like this: 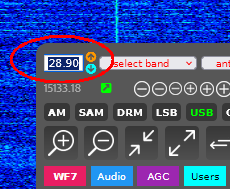 I cleared cache & cookies, restarted FF, shut down and power-cycled my kiwi - all didn't help. In Chrome, all looks normal, so it seems firefox-specific. Short time before was a FF update from 97.0.2 to 98.0, which suggests that this could be the cause.

To verify that, I took another windows-computer which had not yet been updated. There the kiwi UI looks fine as usual, but after updating firefox, the same problem appeared also here. Even more extreme - only two digits are visible! (This could possibly be because the screen is smaller, only 1024x600, it's an old ASUS netbook.)

So it seems almost sure that the least firefox update is problematic. Has anyone similar experiences?