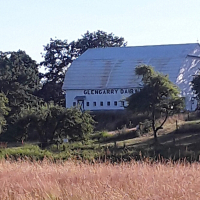 Does anyone have direct experience running the KiwiSDR in proximity to HF transmition?

My Kiwi antenna (50 meter EFLW 9:1 unun) is about 50 meters from my transmitting 20/40/80 Meter dipole. They're running the same direction, but not overlapping. I am only putting 100 watts into the dipole antenna.

I am concerned about excessive RF hurting the front end on the Kiwi.

I could install a remote antenna switch to ground the Kiwi antenna while transmitting but it would be a little complicated. The Kiwi is on another barn and I am using a router extender to bridge the gap. It works well, much better than a 300 meter feed line.